Too many people today are having a terrible time figuring out what is bad and what is good.  Our current culture confuses the matter more, with different moral codes presented depending on the show, the culture, or even the week.  When we don’t have a solid moral compass, we don’t have any clue as to what is good and what is bad.  And without that, our world falls apart.

Knowing this, God has given us His word as the moral compass we need.  Within that Book, there are myriad lists of the kinds of things that are Good, “virtue lists”, and lists of the kinds of things that are Bad, “vice lists”.  These lists range from the very short (“He has told you what is Good and what the Lord requires of you: to live justly, love mercy, and walk humbly with your God.”  Micah 6:8) to the very long (I won’t recite the book of Deut. or Leviticus here, but both are basically Vice lists).

Today, we have the earliest vice list in recorded biblical history.  And a quick look at it give us some important insights into the expectations of God.  Over the next two days, we’ll look at this list and just what it contains, and perhaps as importantly, what it doesn’t.

Good:  weep for those in trouble, grieve over poverty, hospitality, caring for the homeless.

Bad: lust, lying, adultery, denying justice to workers, not helping the poor/widow/orphan, clothing the needy, put my trust in gold instead of God, idol worship, rejoicing over my enemies misfortune, hiding sin out of fear of others’ opinions.

Tomorrow we’ll look at these more closely.  For today, look over this list and see if your righteousness matches that of Job.

In the midst of Job’s argument with his friends, there is this brief interlude likening wisdom to fine gems.  The mining metaphor, the preciousness of wisdom, and its elusiveness are all beautifully and poetically on display.

But why wisdom?  Isn’t obedience the most valuable part of our faith?  Isn’t faithfulness more precious than anything?  Isn’t holiness the hardest thing to achieve?  Why wisdom?

Throughout the Old Testament, especially in the book of Proverbs, wisdom is the goal of life.  In fact, it is personified so often and beautifully that a few throughout history have suggested Sophia, Greek for wisdom, as a fourth member of the Trinity!

Wisdom is what gives us the ability to use the knowledge we learn for God’s glory.  To quote a famous author, “Knowledge tells us that tomatoes are fruit.  Wisdom tells us not to put them in a fruit salad.”

And wisdom begins with a healthy fear of God.  If we do not respect God even to the point of a little fear, we will not be willing to obey Him, learn from Him, and accept His correction when it is difficult.  And wisdom can only be gained by experience, and usually painful experience is the best teacher.

Why wisdom?  Because everything else we deem important flows from that.  So week wisdom above all else.  Sacrifice accumulation, reputation, and comfort if that’s what it takes to gain wisdom.

Herod Agrippa, grandson of Herod the Great of Jesus’ birth narrative, is the leader of the Roman Empire in Judah.  And as a political animal, he tests the waters about these followers of “The Way” by taking one of their leaders, James the “Son of Thunder” and one of the 12 apostles, and killing him.  Since the people seem to like that, he arrests an even bigger fish, Peter, with plans to do the same to him.

When we say “the people seem to like that,” we have to remember that this is Judah, a Jewish territory.  And though Rome rules it, it is populated by Jews.  In other words, it is the Jews who like the execution of James the Christian, and who inspire Herod to arrest and ultimately execute Peter.

This is a hard truth.  When we see so much evil, so much anti-God in this world, we can only suppose God has lost control.  When death reigns and violence is worshiped, when children are separated by hundreds of miles from their parents for a misdemeanor, and the innocent suffer, what can we think but that God has lost it.

As a Spiritual Director, I am taught to observe rather than control, to trust the Holy Spirit to reign, but even with that it is very hard to trust that “God’s got this”.  However, nobody said faith was easy.  Nobody said faith would make things go my way or bring justice.  Faith is hard, faith is illogical, but faith is mandatory for a relationship with God. 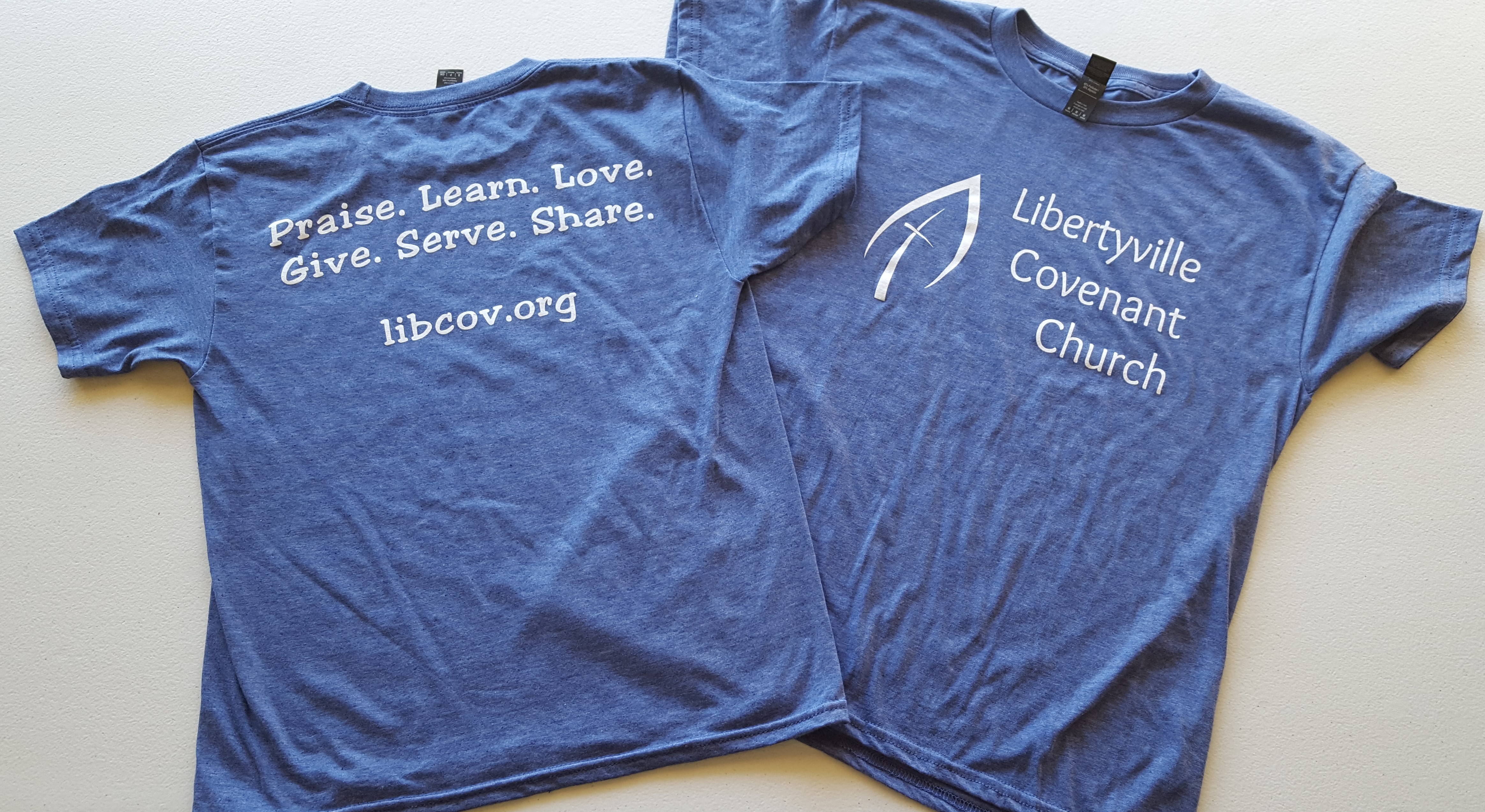 Our LCC Tshirts are getting rave reviews!  “This is the most comfortable shirt I’ve ever worn!” said one of our church friends.  “I love being able to put our church name out there for people to see,” said a member.  Whatever your reason may be, you can pick up one of these amazing shirts at church for a simple $5 donation.

Available in the front entryway, just find your size, take your shirt, and give your payment to the office or drop it in the offering plate.

We are hoping to wear them for a group picture at the All-Church Retreat (see the post below for details) and anytime we are working in the community together.  So grab a shirt and show your LCC pride!

Peter’s leaders are not happy with his behavior in Ceaserea with Cornelius and family.  Peter is both a leader in the church and also obviously a very well-known figure.  So if he’s not  only conferring with, and not only going home with, but also baptizing a Roman Centurion, gentile and oppressor though he is, then they have a problem.  Yesterday we talked about what we do with people who are acting against the Law but want to follow Jesus.  Today we have to talk about what happens when these unacceptables receive the gift of the Holy Spirit, a “down payment on (their) redemption” (Eph. 1:14f).

This was a political issue as well as a religious one.  But Peter has a good argument.  “How can I argue against God, who gave them the Holy Spirit?” he asks.  Traditionally, that was evidenced through the gift of tongues as was probably the case here.  And so with that proof, Peter baptizes not only Cornelius but his entire household (presumably including infants!)

What would be the reaction today if the leaders of the church found out that one of their famous fellow leaders offered a sacrament to an unclean, sinful outsider who nonetheless was seeking Jesus?  I bet they might suspend that person’s ordination.  They might even fire them from their leadership position.  Today, the political overwhelms the spiritual.

In contrast, what was the reaction of the early church to this breach of protocol?  “They praised God.”  They trusted Peter, and the evidence of the Holy Spirit, and God Himself.  “So then, even to Gentiles God has granted repentance that leads to life.”

Repentance leading to life is offered to even the most unlikely of groups.  Not immediate acceptance, not power and leadership, but the gift of repentance which leads to life. If only we’d learn that God offers this gift of repentance to everyone.  And if only everyone would seek repentance.

Caesarea, a city named in honor of Caesar Augustus, was the headquarters of the Roman Legion.  It makes sense, then, that Cornelius would live there, being a centurion in that Legion.  But it doesn’t make any sense that Peter would go with him into the mouth of the oppressor.  Not only would a resident of the oppressed people find it ludicrous to willingly enter the home of a commander of the oppressive regime, but as he mentions, it is against Jewish law.

You see, not only is Cornelius a Roman Centurion, he is a gentile.  As such he is by definition unclean, and according to Jewish law, uncleanness is contagious.  Peter was not only forced to act against his political expectations but also his spiritual ones.

But this is not the story of Peter sharing the gospel with a random Gentile to make a theological point.  This is Cornelius, a God-fearing man who received an angelic visitation as well as the Holy Spirit.  But even more importantly is his attitude in bringing Peter to his house in the first place.  He doesn’t come to claim his right to be a Christian.  He doesn’t come to force a revolution in Jewish thought (Christians at this point still thought of themselves as reformed Jews rather than Christians as we think of them).  Instead, he comes to Peter with this: “Now we are all here in the presence of God to listen to everything the Lord has commanded you to tell us.”  The humility is astonishing for a military leader.

How do you approach those whom God has sent to you?  This could be parents, mentors, Godly friends, authors, theologians, or anyone God has put in your life to bring His word.  What can we learn from Cornelius’ attitude in the midst of a pride-based society?